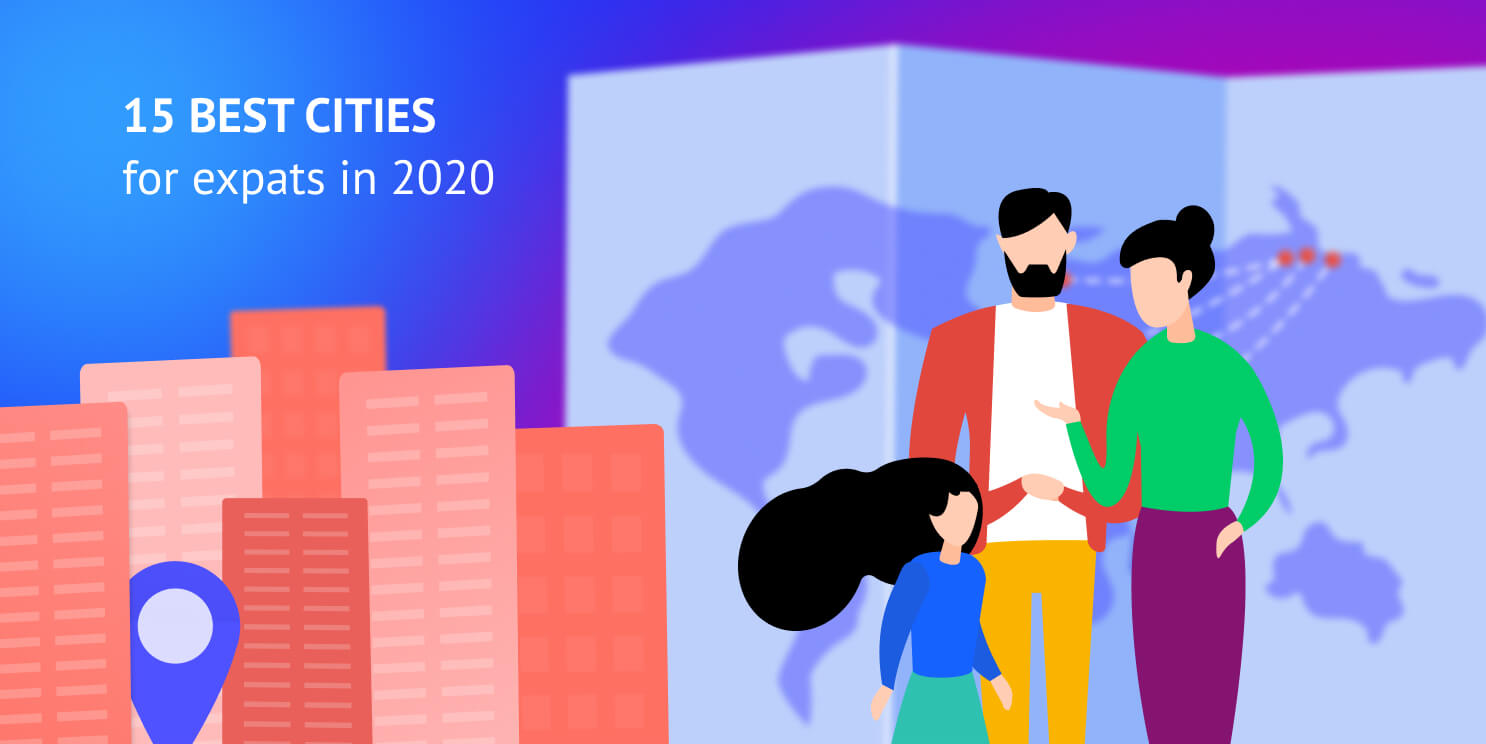 Crazy 2020 is about to finish, so it’s a perfect time to make conclusions and ratings. Even though the Global Mobility Industry is not in a great position nowadays, people will never stop moving around the world looking for a better life. Therefore, even a worldwide pandemic didn’t stop expats from experiencing the advantages of living abroad and sharing their experiences.

This article is written according to InterNations survey results on expat locations, so 20,000 people’s experience built this list.

No wonder we open our list with this city, this is where Clearmove’s journey began. Clearmove’s first client office was opened in Abu Dhabi to serve the big international consortium Mubadala.

UAE attracts expats first of all with their tax-free regime, which means that employees can keep all their income to themselves. Add here a warm climate the whole year round, good quality of life and it’s no mystery why it’s so popular. Plus the Emirates is an international hub, with access to many attractive Asian and island countries, as well as Europe. Within a 5 hour flight, you can arrive in either the center of clean and cozy Frankfurt or loud and crazy Bangkok. A perfect spot to live in.

Moreover, there are several famous attractions in Abu Dhabi like Ferrari World and a Louvre outpost, but that’s just an additional advantage.

An exotic “Latino” country but at the same time with relatively good quality of life. People say that locals are friendly, food is great, and the cost and quality of education and childcare are pretty good.

Mexico City is a perfect place for Americans or those who work with American offices, due to a similar time zone (equals to central states). It’s easy to keep in touch and communicate throughout working hours between offices all over the continent.

Being situated in the heart of Europe, Prague has its unique atmosphere and charm with its old streets and beautiful architecture. At the same time, the cost of living is one of the lowest in Europe, keeping the quality of life pretty high. No surprise many IT companies moved their RnD departments here.

According to statistics  nearly 90% of expat parents here are satisfied with their family life and nearly 84% also ranks the state of the economy positively. Assignees are particularly happy about the country’s transport system and the opportunities to travel, ranking third place after Singapore and Hong Kong.

A small and rich country in the Middle East is becoming increasingly popular among international assignees. Qatar’s petrochemical reserves are vast and have brought the country reasonable financial wealth. The country is developing fast and becoming the next top-spot in the region.

Most ex-pats in Qatar live in villas, similar to a townhouse or attached home, in a secured gated compound with anywhere from ten to one hundred or more units. These compounds are like neighborhoods and may include clubs for various interests, party venues, and other amenities that help ex-pats socialize and live an active lifestyle.

More than 80% of ex-pats in Aachen consider themselves satisfied with their jobs and safety. And a slightly lower percentage say they’ve got a higher income than they would be earning at a comparable job in their home country. If it’s so good in terms of savings what else might you need for a perfect life? Maybe the spas that Aachen has everywhere – it is a spa city after all.

The only unexpected disadvantage of living in Aachen is the transportation network. But who needs it when you have spas on every step? (not sure about humor in this paragraph but you decide).

If you’ve got a job assignment in Basel you’re a lucky one. Moving here on your own will mean almost immediate bankruptcy if you are a regular worker with an average salary. The cost of living is generally pretty high in Switzerland. But if a company took care of your work assignment – congratulations, you are in good hands.

Nearly 30% of respondents reported they struggled to get used to the local culture and locals were not very welcoming. Take this into consideration when thinking about those gorgeous mountains, cheese, and chocolate.

It’s the third-most populous city in the Netherlands, therefore it has a lot of international organizations, schools, and embassies, which makes it a perfect place for ex-pats. Even though this city is ranked one of the world’s best for job security, assignees say the range of careers available is quite limited. The city itself is a mixture of modern skylines with a beautiful historic city center.

You’ll hate the bad weather if you are a Brit, as you’ll feel just like you’re at home (but maybe that’s what you want?).

An idyllic lake city with perfect local transportation, good environmental quality, and a high level of personal safety – this is what attracts expats into this paradise.

Downsides? Nearly 30% of respondents said they struggle to feel settled in the city, and that people in this city are unfriendly toward foreign residents, similarly to other Swiss locations. Likewise, remember the high cost of living. Do not come unless your company gives you a full package that includes accommodation.

Almost every expat here is delighted with the climate in Barcelona, as well as with the range of leisure activities. With very hot summers, you also get a mild winter with an average temperature of +15. Barcelona is great with public transport, travel opportunities, parks and amusement centers, education. Also, the whole Spanish coast is a great holiday destination.

Expats say it’s easy for them to get settled and make friends in this city. Lisbon is famous for  buzzing nightlife, easy access to the beach, delicious food, picturesque old streets, and castles. The climate in Portugal is great. It never gets too cold and the biggest challenge is to survive the summer’s scorching heat. The cost of living in Portugal is one of the lowest in Europe, which is especially great for expats whose rent is covered by their company. Their healthcare is free if you have proper insurance, which is also a big advantage for international assignees.

Another interesting fact – last year Lisbon was named the hottest travel destination for millennials in 2019.

Being quite opposite to many European countries in terms of climate and weather, Montréal is highly ranked in terms of work-life, cost of living, and affordability of housing. It is often voted the best city for living in, within both the USA and Canada. If you aren’t afraid of cold and long winters, you’ll definitely appreciate the dynamic job market and superb career opportunities.

This relatively young city-country is a highly developed, ordered, and clean oasis within noisy and crazy Asia. A booming economy, spotlessly clean streets, and extremely high-tech surroundings – all why people love Singapore. Also, it’s home to the world’s cheapest Michelin-starred restaurant and one of the world’s best bars. Some would consider it extremely expensive, but the quality of life and economic situation in Singapore is great.

Vietnam is a famous destination for western expats first of all because it’s great for saving money. With relatively low prices for accommodation, food, and entertainment, it is very easy to put away the majority of your salary, whilst continuing to live a comfortable life.

Some assignees might complain about the city’s dirty streets and lack of environmental awareness. This is a common issue for the whole of the southeast Asia region, as these countries are still developing and need some time to adopt the environmental consciousness of the developed world.

Amazing food and vibrant local culture, which is a mixture of Chinese, Indian, and Malay are found here. All three nationalities with different religions and backgrounds live under one roof and build the wealth of the country altogether. Therefore it is easy to get by with just English – it is an official language here and lots of people do speak it, unlike neighboring Thailand or Indonesia.

The cost of living is quite cheap. Another great factor is that  Kuala Lumpur is a travel hub for several Asian airlines, which makes it awesome for those who love to spend their vacations or even weekends on the beach. Within just a 2 hours flight you can get to the white sand beaches of Thailand, exotic temples of Myanmar, or picturesque volcanoes in Indonesia. A great place to be for all wanderlust people.

Taipei received lots of awards as a city for ex-pats in recent years. No wonder, since it’s one of the most comfortable places in the world to live. This is because of a convenient lifestyle, good public transportation, national health care, and amazing food. The only disadvantage that was named by ex-pats is the difficulty to learn the local language.

Did you know that Taiwan was Asia’s first to legalize same-sex marriage? Possibly it is because of the progressive views of the government that so many people consider it a great place to live. Or probably it’s just because Taiwan has a low cost of living and good career prospects. Either way, it’s a good location!

Hopefully, next year will be easier for all of us in terms of moving around the world. The pandemic, touch wood, won’t last forever and soon we will be able to enjoy the world’s greatest destinations for all our needs.